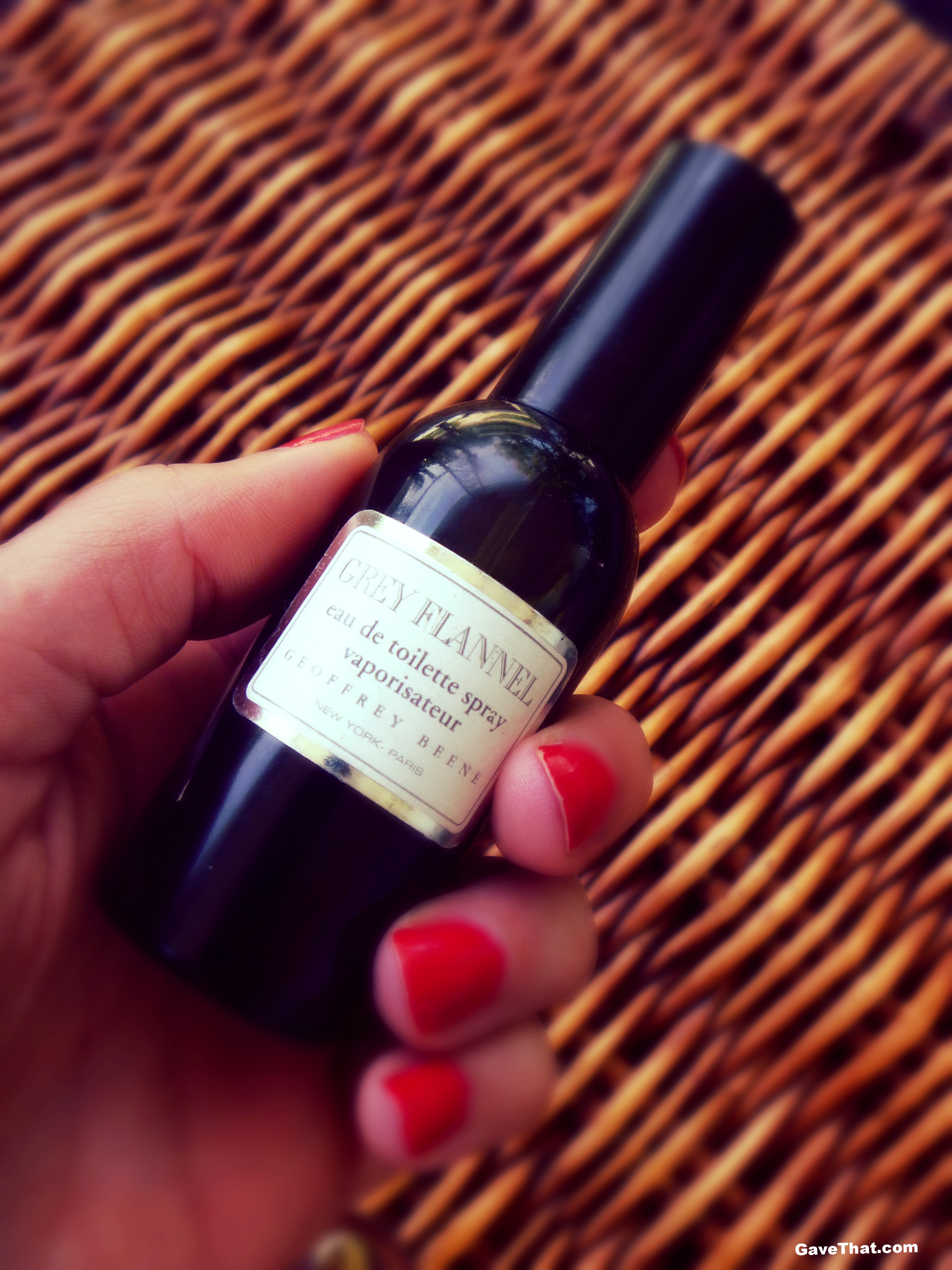 In honor of Father's Day I take one of the most controversial men's fragrances for a spin, Gray Flannel by Geoffrey Beene who's net profits happen to also fund many philanthropic causes from Alzheimer's research to Save the Children. Keep reading for...

Despite many men expressing how they rather choose their own scents, even going so far as to ask, would you like me choosing your lipstick color?, (point taken guys!), fragrance still tops the go-to gift list of the masses. Especially when it comes to the last minute sort. This gives me the excuse to keep up with the delicious world of cologne just as much as perfume. One scent that would come up here and there quite often was Geoffrey Beene's Gray Flannel which I gathered was something of a classic. At the same time it's name became synonymous with smirks, sideways glances and a pervasive feeling of disdain. Why was never explained but there seemed to be some heavy undertones of it being in really bad fragrance territory. A no-go gift zone.

After finding a lonely bottle and leaving it behind, mostly due to the above, I decided to look up its notes and history. Gray Flannel as it turns out is a classic having been created by influential designer Geoffrey Beene and Andre Fromentin in the mid 1970's. That's when I also found numerous glowing reviews not only from men but from a surprisingly large number of women. Fragrance is genderless, it's all about the current marketing of the time but this pushed my curiosity to the brink. I had to go back a week later. Finding another even lonelier bottle I spritzed a bit on my wrist and waited.

Herban Cowboy's Dusk, Le Couvent Des Minimes Lavender & Acacia, Agraria's Balsam, and classic Dominica Bay Rum aftershave are personal faves. Along with those go an appreciation of violets and vanilla (Laurence Dumont), pipe tobaccos and incense sage. Similar notes Beene and Fromentin choose for their scent here. At the same time I did not come into this having any warm and fuzzy memories of Gray Flannel to fall back on as many others do. This was literally my first sniff.

The first moment was intensely green pine needles and bitter herbs which my mind always likes to turn into not so nice spikenard. Kind of reminiscent to how Clarins' classic Dynamisante smells when first squirted on. Very Medieval and akin to a Nicholas Culpeper brew. Even at that point, despite chypre's being a personal kryptonite, I didn't feel as if I had made a huge mistake spritzing this on, while out shopping no less, nor did I feel self conscious wearing it. Especially since everyone said this phase would pass anyway. Sure enough the whole harsh leafy greenery immediately vanished when we stepped outdoors into the hot, muggy heat that was waiting for us outside.

What was left was a distinctively floral scent of earthy violets and, every once in a while, whiffs of orange blossoms (neroli) and bergamot. Then a slight soapy clean comes along, mixing with an almost Spanish Agua de violetas baby splash and that's how it stayed. Despite all the notes listed for this fragrance including: sage, rose, geranium, narcissus, almonds, vetiver, cedar and oakmoss, a cozy, almost dryer sheet feel, that Clean corners the market with today is what perseveres. That's when things took a curious turn. Continuing on shopping, going out to lunch, enjoying the sun, people started acting a lot differently. Smiling, being very nice, going out of their way to help me. A fluke? No, I doubled the sprays the next outing and this time there were complete strangers coming up to start lengthy conversations. All ages and genders. Even a cute little dog. Over and over again. No one asked what I was wearing but there seems to be something subconsciously charming about this scent.

After around 6 hours all that's left is a little vanilla from the tonka bean and something leathery. Then poof! it's gone. In the end my thoughts are this is a really discreet and timeless fragrance that I personally would love to smell on anyone. I'm actually rechristening it The Saint as this is so quintessentially Simon Templar. The start is rough but it has a unique, disarming classiness about it in the end.

Happy Father's day out there to all the great Dad's of the world, especially those wearing a little Gray Flannel!

Image: mam for Gave That
Email Post
Posted by Gave That Labels: for him Give Twice Perfume reviews