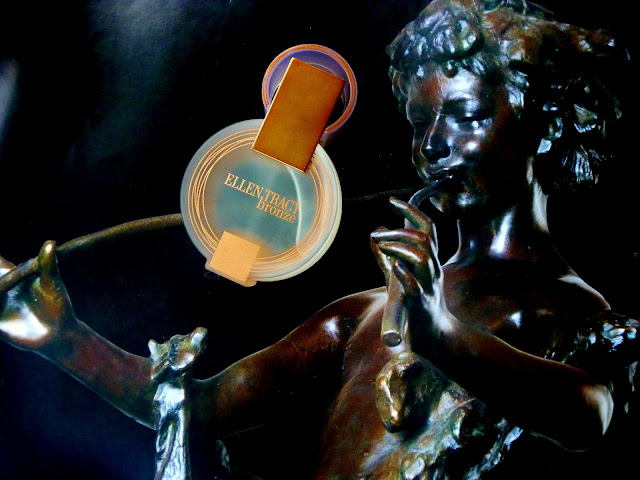 Now it should be really obvious by now that there is a bit of an obsession going on with fragrance around here. The thing is you're in it with me evidently because every time I swoon about a new scent discovery it becomes an insanely popular post. That really shouldn't come as that much of a surprise because despite how tricky to pick out, perfume remains one of the top gifts given. Even when they're slightly out there or insanely old. Sometimes the stars align, your subconscious kicks in and it all leads to hidden treasure worth sharing. Something that happened recently with this little bottle of Bronze eau de parfum by Ellen Tracy!

Picking up the nondescript white box with metallic bronze rings all I could remember was vaguely seeing it in a department store and a magazine, vanishing before I could get a whiff (fyi it came out about 4 years ago). Which is sadly norm for fragrances today, as former New York Times fragrance critic Chandler Burr remarked with so many new releases each year it's hard for people to fall in love with a perfume. In many cases it takes years for a fragrance to catch on and by that time it might already have been discontinued. With Bronze, after everyone realized this was not a dupe for Elizabeth Arden's Bronze Goddess, it started to form a cult following on its own merits. Someone who worked on the fragrance clarified that the name and inspiration comes from Ellen Tracy's exclusive bronze label. Not sun kissed skin. Holding the box, unable to smell it, having to buy it blindly, in the back of my mind flashed someone saying something about it being for violet lovers.

Reading what awaited inside the frosty bottle made it sound better and better. It has notes of lemonade for instance. Then there was my old friend honeysuckle and orange blossom along with both cleanly sweet purple violets and their green leaves. Then another love you do not often see, heliotrope. In the hot muggy months of summer you just do not want something too rich, too decadent, too thick and by the notes alone Bronze seemed summery, even possibly transparent and light. Spritzing it on for the first time was an instant oh yeah! moment complete with goofy grin although this smelled nothing at all how I expected.

The way I'd describe Bronze is it's a lite version of Givenchy's original Ange ou Demon (Angel or Demon) if such a thing is possible. It has that same creamy vanilla fountain drink sensation going on. Similar to the best part of Dior's Hypnotic Poison and even the woodier vanilla of Thierry Mugler's Alien. Only instead of that syrupy vanilla coke or pungent root beer scent, Bronze is more of a cream soda or sarsaparilla with whiffs here and there of honeyed beer. Their's also no spice to speak of, no saffron or cold black licorice, no pink pepper, making it less polarizing I guess. The fizzy lemonade, greenery from the moss and violet leaves cut through the frothy sweetness and keeps it light, well for something being compared to Ange ou Demon at least, and borders on gourmand thanks to the heliotrope.

Heliotrope is a curious flower that madly attracts butterflies with its lilac looking billowy purple blooms and stands for utter devotion in the secret language of flowers. It once lived in my little garden where it routinely filled the air with its scent of freshly baked cherry pie. Weird I know but true and heavenly. It has this purple Synesthesia quality going on as well. In Bronze it rings pretty true to form and lends to marzipan and sugary pastel French macaroons followed by the fleeting fruitiness of cheery pie filling. With a side of cream soda and vanilla ice cream infused with smoky tonka beans and coumarin. One of the best heliotrope fragrances I've smelled to date and, coming in third, behind Geoffrey Beene's Grey Flannel and Laurence Dumont's Vanille Violette in the violet department, everyone was right... this is so underrated.

Still despite all the happy memories of going to Stewart's Drive-In and ordering their root beer floats to go along with a huge gooey pizza burger as a child, the real reason I adore these sorts of fragrances, and for all of its vanilla creaminess, Bronze also possess a shadow side to it. An essence of film noir heroins. Which makes sense as these types of scents were originally created to mask, compete against or even enhance cigarettes and smoky jazz clubs. Opium, Poison, Lancome's Magie Noire (black magic). Their names pretty much say it all. Bronze has a way of invoking the same character and mood just in more manageable doses and with less melodramatic risk.

Takeaway: lovely during nighttime bonfires on the beach, an antidote to cigar bar smoke, a tide me over until it gets cool enough for the truly dark to come out and play. If you know a Ange ou Demon, Hypnotic Poison &/or violet lover, try this as a gift.

If stalking TJ/MAXX is not your thing find Ellen Tracy's Bronze over here. For more fragrances that are part of this series visit the beauty & scents area over here.