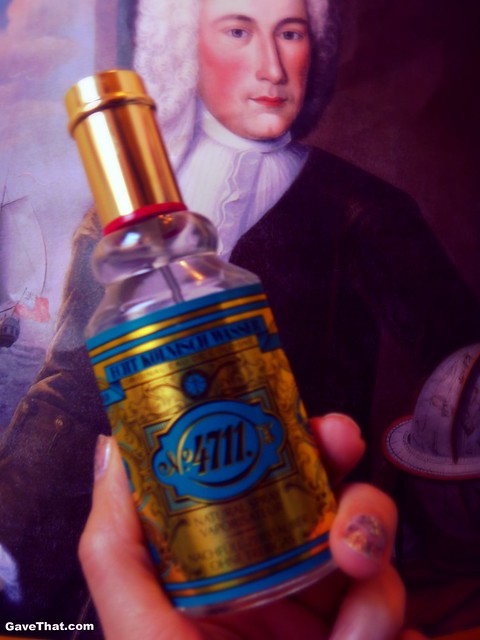 A gift guide here wouldn't be complete without a spritz of something fragrant! This year it's a trip in the way back machine with a scent over 220 years old that smells, well, ridiculously modern. Keep reading for what it is and... 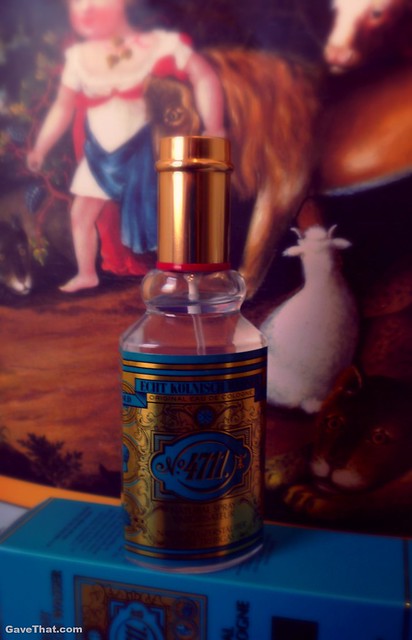 You've got to smell cologne.... real cologne from Germany, one of my friends who originally hailed from the region once told me and on my to do list it went. Then through some major round about way I discovered a trip to Germany or even a fine fragrance boutique really wasn't necessary because one of the oldest traditional colognes still in production had been around here, albeit incognito, my entire life all along. I'd even seen it numerous times.

Muelhens' 4711. That distinctive blue and gold label on huge and tiny bottles alike had been an omnipresent fixture of childhood barbershop trips with my Dad and later, the men's shaving section of local drugstores. Never really taking the time to actually read the label I always assumed it was aftershave lotion befitting that Home Alone bathroom scene or, something that at least smelled that way.

Then my love affair with orange blossom was rekindled and the hunt for a light summery version was on. Two scents that were recommended time and again included Guerlain's storied Cologne Imperiale and Neroli Portofino by Tom Ford. I was torn, Guerlain's Guerlinade has never been my friend just like Chanel's synthetic aldehydes had thwarted my attempts at liking any of their offerings for years. It sounded so pretty though... crafted for Napoleon's wife Empress Eugenie in 1860 no less. Then you had Mr. Ford's creation which, I must say, always uses top quality ingredients but the major searing complaint about Neroli Portofino and Cologne Imperiale was their dismal lasting power. 30 minutes tops.

Then another alternative with similar notes to Neroli Portofino was revealed by Sebastian at Man Loves Cologne which sounded intriguing, was Muelhens' 4711 Original Eau de Cologne by Maurer & Wirtz. Wait that's not an old time barbershop aftershave!? Nope, it's an airy citrus and floral cologne that predates another scent cousin and doppelgänger Guerlain's Cologne Imperiale, when it was created by Cologne Germany based Wilhelm Muelhens in 1792. Both having had similar uses as not only a fragrance but also medicinal, namely as a headache relief. History buffs can fall down a rabbit hole with these lovelies but I think anyone has to be just a tad curious about what people wore back then. 4711 is definitely an inexpensive way to find out. I did put 4711 next to Neroli Portofino and they smelled almost identical to one another.

After it arrived in the mail (some classic fragrance purge must have happened because Maurer & Wirtz was no longer to be found anywhere in store, thank goodness for Amazon) I waited for a quiet time and space to spritz a little on. That first puff was just absolutely lovely and nothing at all how I had envisioned, even after learning 4711's true, very un-aftershave notes. Actually it was hard to imagine what it might smell based on the notes alone and an image of George Washington affixed to them for some unknown reason didn't help. Would it smell of potpourri which some very old fragrances have a tendency to?

Thankfully no, Muelhens' 4711 cologne comes off so modern, so now, so timeless and refreshingly unique it took a while to sink in. The citrus top notes that make up 4711, orange and lemon oils along with the bergamot, mingle with the rose and maybe even some peach to create this soft, sparkling sweet feeling of orange blossoms swirling around on a warm breeze. There might be some jasmine in there too but it's all sunny white floral bliss for me with a very Mediterranean lemon that peeks though and vies for attention. Underneath is something herbal, slightly green and dry in a gin and tonic sort of way which totally makes you believe this can be worn by anyone.

Then this almost tropical coconuttiness starts to come through followed by a fresh cotton clean scent. It's almost beachy. When the orange blossoms are there in full force you can thoroughly understand Truman Capote conceiving Holly Golightly sprinkling 4711 on her neck but as they whisper away, this is straight up Fletcher Christian (Marlon) in Mutiny on the Bounty. This subtle musky cedarwood and tahitian vetiver that is left underneath on the skin is a major switch. If you love Provence Sante's Vervain or Nuxe Huile Prodigieuse definitely try this too as the way they layer over one another is addictive.

Mr. Ford, Muelhens, Guerlain were all working at the end of the day with very illusive top notes that fly away quickly and disappear into an oblivion despite the finished products price. Muelhens just let's you douse (or sprinkle) yourself at will and feel good about it. Another surprise, if you order the bottle seen here, the atomizer screws off for refilling the glass bottle over and over. Oh and one caveat, original 4711 is a unisex cologne and they're all the same. Some are calling the spray bottle versions for women and doubling or tripling the price.


For more fragrant discoveries see the scents area of the blog over here.