How To Be The Best House Guest Ever 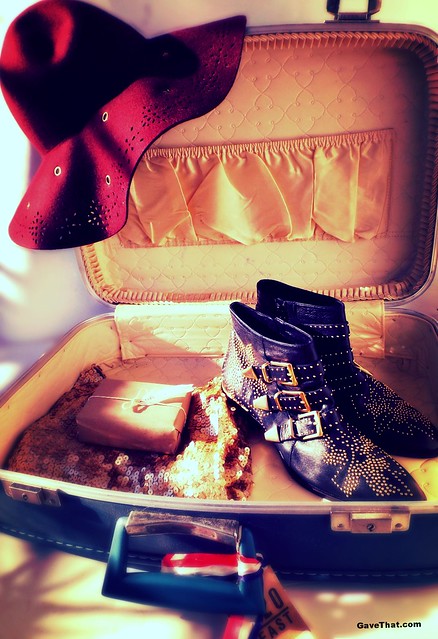 With the holiday travel season in full swing there has been one topic I've been meaning to bring my mentor, the late VOGUE editor and etiquette guru, Millicent Fenwick, back around for a primer on how to be a really great house guest. After reading her advice on the subject and having many ah-ha! moments, I knew I had to share her wisdom with you too. Whether you're an exchange student coming to the US for the first time, sharing a friends cabin in the woods, couch surfing or staying with aunt Fanny for the season, following these tips will give a great chance of garnering an exceptionally rare gift indeed... an invitation for a return visit.

It dawned on me a little while ago after tackling my summer reading list that many of my favorite novels revolved around the hijinks of a particularly well placed house guest. Some good and some bad. It was often that way during childhood as well when new and exciting friendships were made with our neighbors house guests. You always hoped the fun and exceptionally well mannered ones would be invited back and you know what? They always were.

Every era, and culture really, is going to have it's own concept of what makes for a really charming house guest but one thing rarely changes... conscientiousness. Millicent's etiquette advice perfectly homes in on this rarest of qualities and gives an almost third eye sense of perception. So here's some of Ms. Fenwick's best do's and don't's for upping ones house guest game:

Come bearing gifts. Well you knew that one was going to be here for sure! A frequent visitor? Millicent says not to stress because you can skip this... at first but seriously consider sending some flowers afterwards along with a thank you card.

If it's your first time being invited to stay over try to bring something thoughtful yet slightly impersonal, especially if you don't know your host very well. Some craft beer or a few bottles of liquor for their bar tray provided they drink and have one, a pretty candle from D.L & Co. or diptyque, the latest interesting coffee table book out, or something you whipped up yourself (check out my previously posted DIY's including coffee liquor, infused salts and flavored butters over here).


"Most hosts are delighted to receive a jar of  caviar... some fine wine, or a good cheese for cocktails." —Millicent Fenwick

If they have children that you know pretty well it's perfectly acceptable to make the gift totally for them alone. Definitely the longer the stay, the more luxe and special the gift.

Let your host know your exact time of arrival. Some things are out of our control, late and missed flights especially but try to give the specifics about how you'll be arriving, at what time frame and if you'll need further transportation. Ask what's convenient for them and then go back and forth until you have everything hashed out. Try to keep assumptions and peskiness at bay. Arrange your own cab if your host does not volunteer and Ms. Fenwick recommends forgoing phone calls alerting that you have arrived at the air port and waiting at least half an hour if they are picking you up but are late.

Ask questions if things are not crystal clear. How long will I be staying? How's the weather there right now? What sort of things, if anything, do you have planned for us when we get there? When you're accepting an invitation it's perfectly alright to inquire about specifics. Nothings worse than leaving your wellies at home only to find out you will be trudging around a wet clam dig or Amish mud sale all day.

Be a character. Millicent talks a bit about finding the mood and grove of the household and fitting in. Their domain, their rules. Although, along with impeccable manners and tact, I've personally seen the power of personality. Some want so much to blend in, saying, they'll keep out of everyone's way and you'll never know I'm even here that no one thinks to invite them back. Nothing about them or their stay was particularly memorable. Those on the other hand who were gregarious, always quick with a fascinating story, knew how to listen intently, were up for anything and just really positive field invitations left and right.

Take the Boy Scout motto to heart... leave no trace. Millicent points out a host is not a maid but being too proactively tidy can be just as off putting, e.g. reorganizing your hosts garage while they're out or putting away all their children's toys can come off as less helpful and more hyper critical. Instead strive for seemingly never having been there in the first place with everything in its original place, the bed made, your dishes clean and never a hint of nicotine or the smell of perfume.


"A good guest is like Halley's comet... seen and enjoyed, seldom and briefly." —Angela Lansbury

Bother calling the shots about where you go out to eat or the entertainment that you do. A lot of the rules from my previously posted etiquette piece on dinner dates apply here as well. Millicent points out that your host may have made reservations and a full itinerary of plans for the both of you. Even though the gesture of inviting ones host out to dinner at a restaurant you really want to visit seems generous, she brings it back that we're their guest and showing people around their neck of the woods can be a major part of their hosting fun, so why take that away from them? She also points out it's poor form to specifically request going certain places or doing certain activities your host never had planned. Instead she says it's OK to drop a hint but warns to let the host make the plans.

I will say from my own experiences, it depends a lot on how well you know your host(s). If everyone is sitting around twiddling their thumbs, having a pizza or two delivered can be really well received and double as one of those hostess gift ideas it behooves to be armed with.

Confuse being a house guest with being a guest at a hotel. It's not just about the whole housekeeping and room service thing some confuse their host with, the freedom you typically have at a hotel and what you're generously being given in the home of others is decidedly different. Millicent advises against inviting people including new and old friends over to your hosts home. She even says to forget about accepting invitations out on the town from anyone other than your host or trying to find ways to sneak out with various friends or potential dates in the wee hours of the night after your host has gone to bed. You should never use your hosts's house as a springboard for other activities she quips.

Leave possessions behind. I'm totally guilty of this and it caused major headaches. It was after one particular fiasco where I actually left something I borrowed from someone else that I vowed not to travel with anything I'd be heartbroken to loose. If you're a frequent guest in the home where you left your possession it might not be that big of a deal but feelings can be hurt when the item completely vanishes, is misplaced or is never mailed back to you as promised. Packing lists are a life saver. In a similar vein, it's probably a good idea to skip using your hosts address for online shopping deliveries and packages as well.

Stay too long in tiny spaces. This is probably mostly geared towards those visiting NYC and their often tiny apartment spaces but really anyone without their own guest room and bathroom (i.e. only a couch) should consider Millicent's advice. She says in such conditions, no matter how generous your host, overnight is the max. You know how fish start cannibalizing themselves when it gets overcrowded in a fish tank? Yeah, exactly.

Be a charming freeloader: I'm going to quote Millicent word for word on this one but the one thing that really hits home is how she asserts that being a house guest is expensive. Not everyone can afford this kind of spending, but if one visits, one should give something. This is an interesting takeaway for the common mindset nowadays that staying with someone over going to a hotel is a way of spending next to nothing. When in reality transportation, presents for the hosts, tickets, tips and so on are on us and should not be automatically shoved over to our hosts. Millicent out's a less than stellar house guest as someone who;


...arrives empty handed and with an unquenchable (boozy) thirst. Doesn't even bring the children (or pets) a toy. Partakes copiously of their hosts liquor, smokes their cigi's or cigars, eats like a farm hand and raids their fridge for in-between meal snacking. Never offers to pay greens or caddie, ticket or entrance fees and leaves without tipping. True he may write (more like text) a delightful note of thanks, but his total investment will have been the price of a postage stamp and the cost of writing paper. This is insufficient, even if it rained all weekend.


Overstay your welcome. Benjamin Franklin's quote on the subject, Guests, like fish, begin to smell after three days., never fails to make me chuckle but he knew the deal. Leaving them wanting more is always something to strive for.