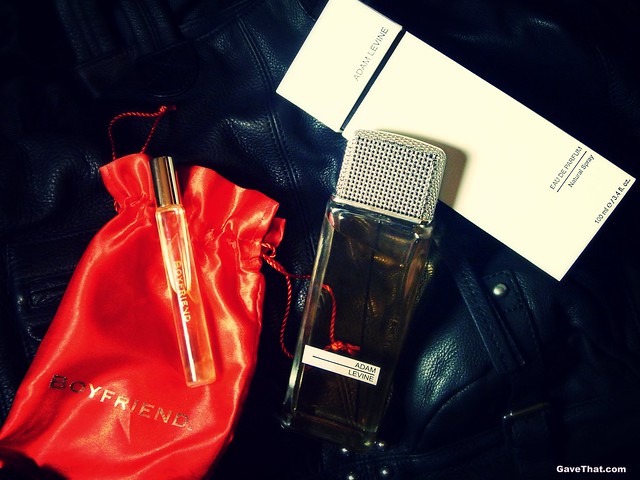 This holiday season and guide wouldn't be complete without a memorable scent to go with it and I've just happened to stumble on a real goody... keep reading for what it is and:

For a long time now I've been meaning to share a long time love, the fragrance Boyfriend by actor Kate Walsh. What's stopped me from really doing so, except for a few comparisons here and there, is that it is sadly discontinued and hard to find. Ever since I've been looking for a replacement to share with you all, as this is such a comforting scent during the snowy holidays and finally I think I have! Well sort of.

Kate Walsh originally set out to create her own niche perfume house and released a fragrance with perfumer Marypierre Julien to mimic the scent of a man's fragrance mingling with a woman's. Something Sarah Jessica Parker tried to do with her fragrance Covet some years before. In the case of Walsh what she really nailed for me was a gothic cathedral from a Hammer film noir. It's beautiful. Thanks to its heavy dose of myrrh mixed with dark plum and a vanillic amber it almost takes the place of the equally rare and discontinued Shanghaijava Encens Mystic by Crazylibellule and the Poppies.

The thing about niche is it's likely not going to appeal to wide swathes of the public and that's kinda the goal. As I've come to discover smelling of resinous incense smoke spewing from a censer is not cool with some. Anything infused with myrrh, frankincense &/or myrrh in perfume form is hard to come by.

Which is why I find it somewhat odd when celebrities (or companies) create fragrances, that they want to sell a lot of, with perfumers known for creating unique creatures like no other. Oddities that are then promptly erased before anyone has a chance to fall in love, as Chandler Burr remarked, or if they do, buy more of. The beauty in Marypierre Julien's creation was both simplicity and something almost holy, raw, unfinished.

Speaking of perfumers lately following their trail of fragrances has led to some lovely finds, often in the most unexpected of places. Take Marypierre Julien. Along with Boyfriend she also created Rosa Alba 1842 for happ & stahns at Anthropologie, two of Rihanna's fragrances many love along with No. 5 "Second Skin" by VPL of the Six Scents series. This last bit ties into this next fragrance.

Every time someone would mention a fragrance reminded them of Boyfriend I would got out and get it with ever dying hope. Did they ever? No. Boyfriend is more about what they chose to leave out such as typical trendy notes of melon, peach and/or something acetic such as grapefruit. That and that gorgeous dark, smoky plum. So I've slightly given up on finding a true doppelganger but what I did find was something in a similar vein.... Adam Levine for Her. What was interesting was the perfumer behind Adam's fragrance is Yann Vasnier who also worked on a perfume in the Six Scents series: Three 6 Ohne Titel: M and Two 2 Damir Doma: Ende / Anfang. Did any of  Marypierre Julien's influence rub off?

In addition to those Six Scents and numerous other niche fragrances, Yann Vasnier is likely best known for being the nose behind Tom Ford's Santal Blush and Velvet Orchid. Hearing this and Adam Levine for Her's notes of coriander, jasmine and benzoin made it too intriguing not to try (blindly as usual).

In short, it's absolute love.

The sad part is, after only being released the year before last it's already discontinued like Boyfriend so order while you can. Evidently Adam's fan base found the scent too Grandma—yeah if your Grandma was Bettie Page(!!). Kid's these days, but seriously this is good and here's why. Many have compared Adam Levine's fragrance to Santal Blush which makes sense but what if it's better? Most artists, even after making a masterpiece, keep ruminating on how they could have done things differently. A chance (and budget) to do a do over would be mighty enticing.

Adam Levine's namesake fragrance surprisingly follows his intentions of creating a simple, classy, your skin only better fragrance. One of those illusive sheer numbers that melds instead of smothers and subliminally entices rather than obviously perfumes. Spritzing it on and expecting woody pencil shavings ala Santal Blush, what I got instead was an almost tropically creamy gardenia with a warm vanilla hiding underneath. Adam must have had a lot of kai, Terranova and Child loving women in his life. Actually along with those white floral's his fragrance at first spritz smells a lot like the original Juicy Couture which, fun fact, the founders created based on their love of Frederic Malle 's Carnal Flower.

There is something a tad pencil shaving-esk underneath but the sandalwood mixing with the Indian jasmine seems to cream together to form white gardenia petals. The citruses also creates an almost lemony pink pepper effect thanks to the jolopeno heat of the spices that thankfully never turn culinary. Still when you compare this to woody perfumes already swooned over on here including Balmain's Ambre Gris and Lanvin's eclat d arpege, this smells downright floral. As it dries down it becomes a deeper vanilla scent with a smokiness not often found in fragrances marketed towomen. Unlike the shavings of dry sandalwood in Santal Blush the wood here is burning and on fire. While still not a replacement for Boyfriend in all its melodic glory this is a close, comforting, fuzzy sweater of a hug worth giving.


It's no longer in department stores but you can find it here and sometimes in TJMaxx if you're lucky.

PS,,, layering this over sandalwood oil has been pure heaven!