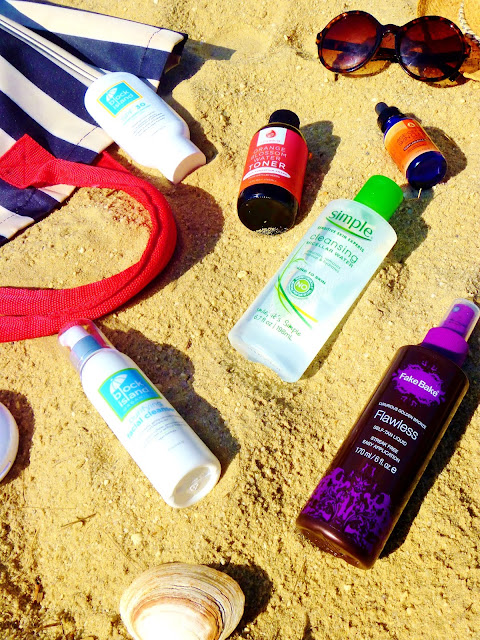 The weekend's here and it's hard not to feel the pull of the sun's rays. This year has been a bevy of biking, picnicking, festivals and hot sand. For a voyeuristic look (you know you want to!) into what's in my bag of tricks that's often pilfered by friends... 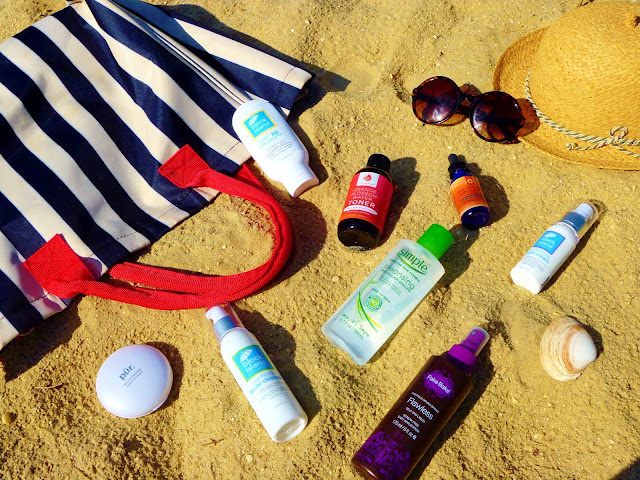 This year skincare wise it has all been about to major lessons learned from the summer before. Use sun protection and try to find products with more natural ingredients. While challenging, this year I have to say that those two things really came together for us. Here are my absolute favorites at the moment:

Sunblock:
If you're similar to me with skin that breaks out just from reading the ingredients label of sunscreen zinc based products are the way to go. Yes the white cast on brown skin is a trade off but that same chalky zinc is so soothing when your fleeing the sun with skin prickly from the heath. The same can not be said for most chemical based sunscreens. The only problem I encountered with these more natural sun products is many (most actually) still contain dimethicones which my skin hates.

Thankfully a new Rhode Island based skincare line called Block Island Organics contacted me about their recently launched mineral based SPF 30 sunscreen. Curious about the ingredients I was happy to see, as far as I can tell, no dimethicones peering back at me. Instead Block Island uses aloe vera juice, water and my favorite shea butter and coconut oil as its base. The latter of which are said to possess their own sun screening properties. It rubs in easily, dries without a telltale greasy slick to skin and it has 22.0% zinc.

After Sun Care:
Block Island Organics also sent along  two other products from there line which I love to keep in my beach bag as after sun skincare. One is their natural purifying gel facial cleanser with rosehips and soothing chamomile and their revitalizing night cream infused with avocado, sweet almond and lavender oils. Again what's missing is dimethicones which I couldn't be happier about. All are also fragrance, dye, peraben and sulfate free—cruelty free and vegan. Find out more about the collection along with its beautiful namesake island here.

Something else with jack of all trades status that's recently added to the bag has been micellar water. The French cult favorite has finally started to show up in US drugstores and one of the least expensive and easily located is this one by Simple. I've used most of the simple line for years now and was happy they produced a clear, fragrance free cleansing (micellar water) water. What is micellar water? Well that's something I'm still slightly foggy about but, aside from being magical, I believe it is water infused with tiny oil micelles suspended in soft water. These micelles attract dirt and makeup to them to cleanse your skin without the need of water. Originally it was developed for French women having to deal with pore clogging hard water. Something anyone in NYC I think can feel empathy for.

The real reason I picked up the Simple version was while looking at the ingredients label I was surprised to see very high up on the list, Niacinamide mentioned. For some unknown reason Simple does not even advertise about this ingredient being the basis of their micellar water. Niacinamide is a powerful anti-redness ingredient that also has the buzzy DNA repairing label attached to it. It's usually found in very pricey products and has been one of the best skincare discoveries I've made all year. A few swipes of a micellar water soaked cotton round is so easy when you've been sunning all day and need to fall into bed sans makeup or sunblock. It's also glycerin and chamomile based so it's soothing too.

Keeping on the Niacinamide kick, the best thing I've found to help with redness and inflammation from too much sun has indeed been serums. Niacinamide based serums. While I've tried a number now, next to the Simple micellar water above, this Niacinamide based serum by Insta Natural works the best. The redness is pretty much all gone by the next day when gently tapped into skin.

Lastly in the skin / olfactory department is my new favorite skin tonic once the sun goes down. Finally I've found a replacement for Kerstin Florian's Rehydrating Neroli Water that's actually more concentrated and easier to order in bulk off of Amazon. It's this Orange Blossom Water toner with steam distilled neroli by Foxbrim. The scent is absolutely heavenly and only one or two cap fulls is needed to make large bottles of tonic mist for your skin. Neroli is not only hydrating but it too can help remove redness and inflammation from the skin when used during times when you're not further exposed to the sun. Major summer love and mood booster.

Cover up:
Two last things to mention is the cult classic Fake Bake Flawless sunless self tanner and this little compact of foundation by Pur. Their new Air Perfection makeup. With the Fake Bake do I really have anything to say that hasn't already been said? The cult designation is deserved. Out of all the different self tanners I have tried over the years and mentioned here this one really does produce those coveted brown legs even if you're naturally pale. Plus it smells delicious in an island fruit cocktail sort of way and comes with one of those brown furry mitts that are always sold out in stores around here. The other is a very easy to tote cushion foundation that I actually use as a leg cover up. Bumps, bruises, mosquito bites, Pur does a good job of covering them and staying put at the same time.

Wishing everyone a great remainder of the season! Let's make the best of it.