A Moscow Mule for Father's Day 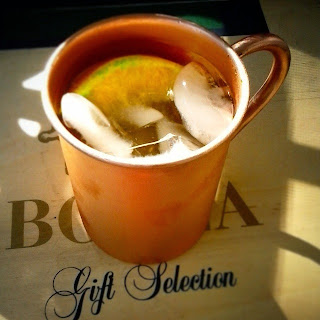 Alright, so Dad (undoubtedly one of the hardest do gift shop for) already has a bevy of beer steins, whisky stones and flasks but does he (or that hostess with the mostess) have one of these coppery beautes? Probably not which is why it's prime gifting material this year. Keep reading on where to get them for Father's Day and the vodka based cocktail recipe to go with it:

If a copper tankard and a mug had a baby you would have what we have here... a genuine Moscow Mule mug, in this case by Pure Copper. Lately these have been exploding in popularity which is interesting since the corresponding drink of the same name and mug was all the rage in the 1940's. According to my mixology guru Mittie Hellmich, who's book would be perfect with a set of these mugs, the Moscow Mule was the cocktail that made vodka cool for the masses. Teaming up with a Hollywood restaurateur, importer John Martin combined ginger beer with a twist of lime and the Moscow Mule was born. Originally the Moscow Mule mugs had kicking mules engraved on them but all the ones I've found today are plain and quite striking.

The drink itself packs a kick but is also pretty simple to make:

by mam for GaveThat.com based on traditional 20s recipe June-12-2015
The drink itself packs a kick but is also pretty simple to make with vodka topped with ginger beer, lime and ginger candy; served in a traditional chilled copper Mule mug.
Ingredients
Instructions
Combine your vodka and lime juice together with ice and pour into mugs. Top with your ginger beer and add lime wedge and candied ginger. The copper mug keeps everything perfectly chilled with the handle helping to keep your hand dry
Details
Prep time: 5 mins Cook time: Total time: 5 mins Yield: 1 serving

Find the above copper mug over here.

Jordan said…
Sounds like a great drink! Might just have to make this for myself first before giving it to Dad... lol! Thanks for sharing this recipe!
June 1, 2015 at 10:50 AM