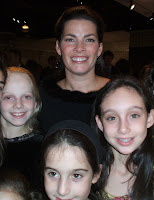 It's that time of year yet again--the rare chance to see the Ice Theatre of New York perform during their 2008-2009 season. We've enjoyed so many of their performances and covered them here at Gave That in the past [see Ice Theatre of New York Starts Spring Season] and want to post them once again as a must see gift to give yourself or someone you love. Our very own Doctor M attended their benefit Gala event and saw a preview of all of this seasons numbers including the Appalachian Waltz and Low Duet. Doctor M also ran into Nancy Kerrigan and Paul Wylie among other fantastic skaters. For more on the event and tons of pictures check out Doctor M's, Ice Theatre of New York 2008 Gala over at The Best Picks blog.

Along with performing innovative and moving pieces The Ice Theatre of New York and its founder Moira North has created an outreach program, the New Works and Young Artists Series which consists of free performances and skating clinics for young people throughout the Harlem school district. For more information visit icetheatre.org.

Gave That gives major thumbs up and thinks this is the perfect gift to surprise and inspire children with!